My statement to the House in full:

I thank the Members who have contributed to a very thought-provoking debate this afternoon. I would like to reply, if I may, to some of the points that have been raised. I will start with the first question raised by the shadow Minister, the hon. Member for St Helens North (Conor McGinn), about a lone actor review—new clause 8. I know he has had what I hope was a lengthy and fruitful conversation with the Minister for Security earlier today. He will of course be aware that the Prevent review we have been talking about touches on this, but the MAPPA review will also significantly engage with this topic.

I have been endeavouring to obtain a firm date for publication during the last few minutes. I am afraid the best I can do from this Dispatch Box at the moment is to say that it will be soon—as soon as practical. I hope it will be within the timeframe the hon. Gentleman was asking for, but I am afraid I cannot give him a precise date. However, it is imminent, and we will do it as soon as we possibly can. I believe the MAPPA review will cover many of the issues that the shadow Minister has been raising in relation to the lone actor threat that he and his colleagues have been discussing.

Let me turn to the substantive questions about TPIMs that arose both this afternoon and in Committee. Let me start with what the hon. and learned Member for Edinburgh South West (Joanna Cherry) termed the business case or the operational case: why are we proposing to lower the burden of proof? The hon. Members for St Helens North and for St Albans (Daisy Cooper) and my hon. Friend the Member for Bromley and Chislehurst (Sir Robert Neill) raised the same question.

The best answer I can give the House to that question—what is the business case for changing the burden of proof?—is the evidence given to the Bill Committee by Assistant Chief Constable Tim Jacques, one of the national counter-terrorism policing leads, who had been briefed by the security services prior to giving his evidence. In his evidence, which is available in Hansard, he gave us three reasons why a lower burden of proof—a reasonable suspicion—would be better and would protect the public. The first reason he gave is that, where an individual’s risk profile is rapidly increasing, there may not be time to establish the higher burden of proof before a threat or a risk materialises. Secondly, he said that where somebody is returning from abroad—for example, from Syria—it is very hard to establish an evidential base that, on the balance of probability, someone has been involved in terror-related activity because, by definition, getting evidence from somewhere like Syria it is very hard, if not impossible. The third reason he gave was where sensitive material needs to be relied on: disclosing that material to get to the balance of probability would potentially endanger sources—confidential sources—and it is clearly easier to get to the reasonable suspicion standard without disclosing the material. Those are the three reasons he gave. [Interruption.]

To pre-empt the intervention that I sense the hon. and learned Member for Edinburgh South West is brewing, I accept that it is true historically—looking back—that there has not been an occasion on which the security services wanted to give a TPIM but could not do so because of the burden of proof. There is no such historical example, and I freely concede the point. I suspect that was the topic of the intervention. [Interruption.] Sort of. However, as my hon. Friend the Member for ​Hertford and Stortford (Julie Marson) said in an intervention, we have to deal in this House not just with what has happened in the past but with what might happen in the future.

We have been clearly advised by Assistant Chief Constable Jacques, and through him by the security services, that this measure is necessary to protect the public. When the assistant chief constable gave evidence on 25 June, I asked him explicitly whether the lower standard of proof would make the public safer. He answered, categorically, that yes it would. 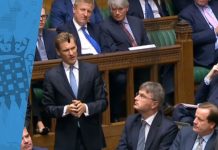