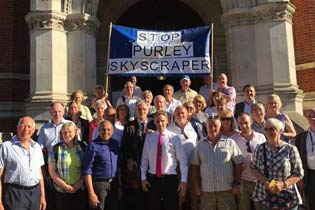 Fantastic news: Croydon Council’s decision to grant planning consent to a 17 floor skyscraper in Purley last December has been put on hold by the Government!

I am delighted that Sajid Javid, the Secretary of State for Communities and Local Government, has agreed to my request to “Call In” the Purley Skyscraper planning application for an independent Planning Inspector to review. The Inspector will review Croydon Council’s disastrous decision to grant consent, and then make a binding decision. This process will take some months.

You can read my letter to the Secretary of State here and his response to me in full here. You can also read the the basis for the review here.

For the Government to intervene on Council planning decisions is incredibly rare and happens only when the decision has an important or serious impact on the local area.

I have previously called for Sadiq Khan, in his role as London Mayor, to overturn the decision – however he sadly refused to do so.

Before the Council reached its decision I made my own objections to the plan clear. 17 storeys is simply too tall for Purley – the next highest building only has 4 floors – and is completely out of character with the local area. This could also set a precedent for more skyscrapers to be built in the future in Purley and the surrounding area. Furthermore, this skyscraper was poorly thought out when it came to the strain it will place on local infrastructure, with only 20 new parking spaces for 220 new flats. The site does need developing, but 6-8 floors would be more appropriate.

The Council’s decision to back this skyscraper was wrong. Sadiq Khan’s refusal to intervene on residents’ behalf was wrong. The Government’s decision to hold an independent review is absolutely the right one.

There is no guarantee at all about the decision the Inspector will reach. But at least local people will now have the chance to put their views to someone independent who will hopefully listen more carefully than the Labour council.