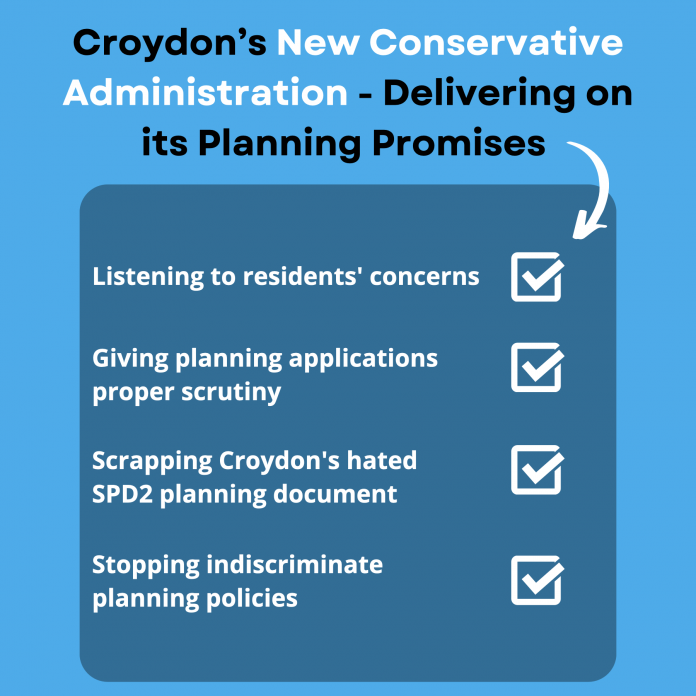 On June 16, the first meeting of the Planning Committee under Croydon’s new Conservative Council administration took place. The usual range of appalling applications were presented, which sought to destroy houses built for families and replace them with flats on Meadow Rise, Coulsdon; the Ridge Way, Sanderstead; and Firs Road, Kenley. A slightly different application for a scheme on Manor Way in Purley was also presented.

Each of these schemes would have been waved through by the Planning Committee in the past without a second glance, when it was controlled by Labour. Legitimate concerns that such proposals would over-develop the area; destroy much-needed family homes; breach planning policy; and damage the character of our area were ignored – despite being consistently raised by myself and many other local residents.

I am pleased that the Planning Committee, led by Michael, afforded the applications the scrutiny they deserve. After careful consideration, the four applications were all turned down. This is a huge and very welcome change. At last planning policy is being properly applied and residents are being listened to.

As your local MP, I am delighted to support the new Mayor Jason Perry’s decision to tear up Croydon’s hated SPD2 planning document, which is the Design Guide that has been the source of so many inappropriate developments right across the Borough. It is fantastic that the Council that Jason leads is prioritising the concerns of residents.

After eight years of appalling planning decisions in Croydon, change has at last come. Residents’ views and planning policy are being respected. Of course, we need new homes, but they will now be built in sensible places such as brownfield sites and central Croydon – and not in place of valuable family houses.

I hope you will agree that – at last – it is such good news that a new approach is being taken to planning.

My Letter to the Mayor of London on his Planned ULEZ...

Chris – the public has a right to get to work