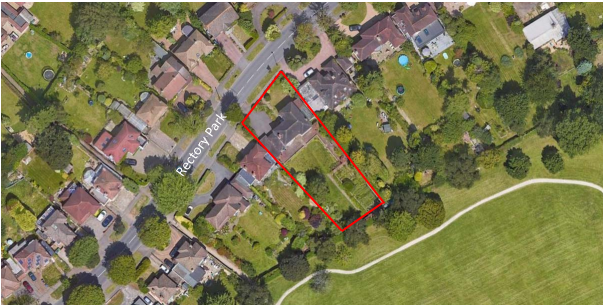 You may be aware of two completely inappropriate development proposed for South Croydon. The first would see the demolition of the family home at 2 Shaw Crescent, South Croydon, CR2 9JA, to make way for 4 3-storey semi-detached dwellinghouses and a terrace of 3 2-storey dwellinghouses containing a total of 7 3-bedroom units. The second would see the demolition of the family home at 18 Rectory Park, South Croydon, CR2 9JN, to erect a block of five flats and three houses.
These applications are being heard by Croydon Council’s Planning Committee on Thursday 24th March 2022. The meeting starts at 6:00pm in the Council Chamber, Town Hall, Katherine Street, Croydon, CR0 1NX.
Members of the public are welcome to attend the meeting in person, however, you can watch the meeting remotely via the following link: https://webcasting.croydon.gov.uk/14991-Planning-Committee.
If you would like to attend in person please note that spaces are extremely limited and are allocated on a first-come-first-served basis. If you would like to attend in person please email Jayde Watts at jayde.watts@croydon.gov.uk by 5pm on Wednesday 23rd March to register your interest.
These are both terrible proposals that would be out-of-character overdevelopment. I have written to Croydon Council to lodge strong objections, and my reasons are as follows:
Re: 21/04742/FUL
Demolition of single-family dwellinghouse and erection of 4x 3-storey semi-detached dwellinghouses and 4x 2-storey semi-detached dwellinghouses containing total of 8x 3-bedroom units.
2 Shaw Crescent South Croydon CR2 9JA
The minor changes to the previous hearing of this application, including the reduction from 8 houses to 7, do not address the serious concerns which I raised in my objection dated 1st December. My concerns are that:
1) The proposal for 7 new homes spread over 3 storeys – would be a significant overdevelopment of this site due to its size, height, footprint, bulk and massing and would be detrimental to the street scene and local context.
2)The predominant local character of this area is of detached homes in spacious verdant plots with distinctive spatial character; this development would fail to respect the local development pattern, layout and siting, scale, height, massing and density.
3) There are no similar tight back garden developments or rows of semi-detached back garden homes in this local area so this scheme would be completely out of character.
4) Overall the proposal fails to respect the prevailing pattern and qualities of the area: it would appear cramped and harmful to the character of the area and would fail to integrate well into the local context.
5) There would be a detrimental impact on the amenities of adjoining occupiers due to overlooking, overbearing impact and loss of privacy.
6) Concreting over of high-quality biodiversity-rich garden space and the loss of trees, natural vegetation and natural habitat.
7) Concerns about the impact upon local infrastructure such as drainage and the management of surface water.
21/03703/FUL
Demolition of existing property and construction of a block of 5 flats and 4 houses with associated access, car parking and landscaping
18 Rectory Park South Croydon CR2 9JN
I am writing to lodge my objection to this planning application. My reasons are as follows:
1) The proposed development site would fail to respect the character and appearance of the area.
2) The height, scale, density and massing of the proposal would result in a cramped, dominant, incongruous and disproportionate development on the site and would be harmful to the street-scene.
3) Inappropriate overdevelopment of the back garden which would be out of character with the local context and harmful to the verdant character of this part of Sanderstead with the site backing immediately onto the Metropolitan Green Belt of Sanderstead Recreation Ground.
4) The proposed houses at the rear are too high and would visually dominate in this semi-rural location.
5) The contemporary re-interpretation design is out of character with the properties nearby.
6) By reason of its siting, mass, design and height, the proposal would appear unduly intrusive and visually overbearing when viewed from neighbouring properties No.16 and No.20 Rectory Park.
7) Unacceptable loss of mature garden trees and hedgerows.
Proposed access would cause undue disturbance, noise and fumes to occupiers of the adjacent property at number 16.
8) The proposed siting would be detrimental to the amenity of residents immediately adjacent to the site due to overlooking and loss of privacy.
9) Inadequate parking.
10) Poorly designed refuse arrangements.
11) Concreting over much of the back garden would significantly reduce surface drainage raising the risk of localised flooding.
12) Inadequate local foul water sewers will cause further foul water discharge flooding in the Riddlesdown area.
13) Lack of consideration of this development upon local infrastructure such as school places, GP facilities.
If you share my concerns and haven’t commented to date then you can still do so up until the decision date via the Council’s website at https://new.croydon.gov.uk/planning-and-regeneration/planning/comment-or-object-planning-application
In the past when the Planning Committee has considered these kinds of applications the four Conservative councillors on the committee have voted against such inappropriate development, but the six Labour councillors have chosen to vote in favour. You may therefore also like to let the Labour Planning Committee members know of your concerns.
Their email addresses are:
Cllr Chris Clark – chris.clark2@croydon.gov.uk – Chair of the Planning Committee
Cllr Leila Ben-Hassel – leila.ben-hassel@croydon.gov.uk – Vice Chair
Cllr Clive Fraser – clive.fraser@croydon.gov.uk
Cllr Joy Prince – joy.prince@croydon.gov.uk
Cllr Jamie Audsley – jamie.audsley@croydon.gov.uk
Cllr Humayun Kabir – humayun.kabir@croydon.gov.uk
There is nothing in national planning law or policy requiring the council to pass applications such as these. Neighbouring Boroughs such as Sutton and Bromley do not pass applications like these, despite being subject to the same national policy.
I very much hope that these applications will be refused and that you will find this information helpful. Please do share this so that as many people as possible are aware of these terrible schemes in our local area.

Save our Green Spaces – Local Plan