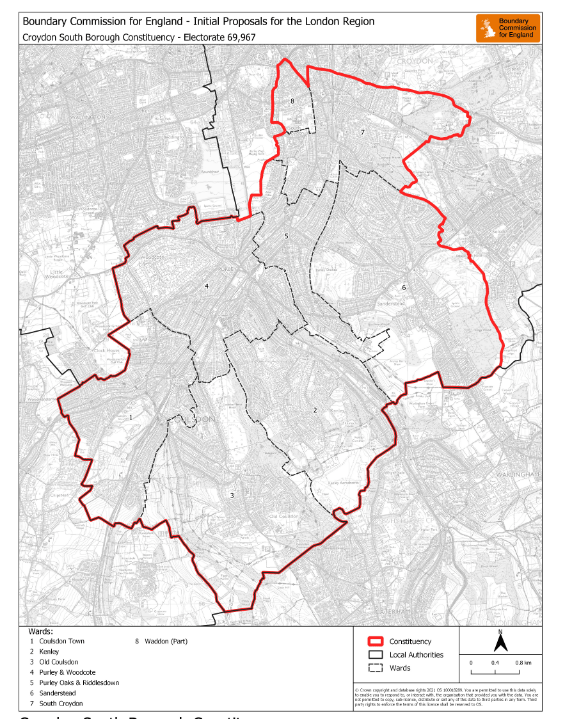 The Boundary Commission has released its plans to redraw the Parliamentary boundaries to ensure votes are roughly equal across England. In 2019 I stood on a manifesto that promised to ensure we have updated and equal Parliamentary boundaries. It is a cornerstone of democracy that every vote counts the same. The boundaries as they stand mean that representation is not equal, and I fully support the changes that are being proposed.

If approved, the existing three seats in the borough will be replaced by four seats: Croydon North, Norwood, Croydon East, and Croydon South. Our constituency will lose the Selsdon Vale and Forestdale wards, as well as Selsdon and Addington Village to make way for the Croydon East constituency. Part of Waddon will also change to be part of Croydon North, which will also include wards from Merton. These changes are necessary so that each constituency’s population of registered voters can be close to an average of just under 73,400 electors.

Norwood is being created from wards in Croydon Central, Croydon North and Lambeth. The new Norwood constituency comprises areas of a similar character, and numerous internal transport links with the railway line to the south-west acting as a natural boundary. Croydon East will be made up of Addiscombe West, Addiscombe East, Park Hill and Whitgift, Shirley North, Shirley South, Selsdon Vale and Forestdale, Selsdon and Addington Village, New Addington North, and New Addington South wards.

These changes are timely and will ensure that people across the country have equal representation in Parliament, with parity of representation across constituencies. The last boundary review to be implemented in England was based on data from 2000, meaning that the current boundaries reflect the UK at the start of the century and not how it is today. Without these changes, MPs could end up representing constituencies based on data that is over 20 years out of date.

Local Support for Residents at Christmas